Imperial legacy of Huế, our ancient capital in the Nguyen Dynasty

Although there are many popular historic sites in the beautiful country of Vietnam, one of the most visited is the Imperial City at Hue. As well as being the stronghold of the last independent Vietnamese dynasty, the citadel also played an important role in the history of Vietnam . It was listed a UNESCO World Heritage site in 1993 and the remaining buildings are being restored and preserved after the destruction from the Vietnam War.

History of The Imperial City of Hue

In 1789, Nguyễn Ánh ascended the throne of a unified Vietnam and moved the capital south to Hue, where he built a citadel. He proclaimed himself Emperor Gia Long, the became the first ruler of the Nguyen Dynasty .

Emperor Gia Long took a personal interest in fortifications, ordering his French advisors to travel home and bring back the latest studies on the subject. Using French expertise, Gia Long modernized Vietnam's defensive capabilities. France aided him to acquire positions on the Vietnamese coast and have the capability to " dominate the seas of China and of the archipelago ,” thereby having control of Asian commerce.The specific location was selected after it was deemed auspicious. Thousands of laborers were conscripted and taxed to build the citadel. The initial earthen walls were later replaced by two-meter-thick stone walls.

The Nguyen dynasty ruled most of modern Vietnam from this citadel and it was modeled on the Forbidden Palace in Beijing , China, which was designed in part by a Vietnamese eunuch. Emperor Gia Long’s personal residence within the citadel was known as the Purple Forbidden Palace and he lived there surrounded by family and eunuchs until his death in 1820.

In 1880, the French turned Vietnam into a protectorate and the successive emperors had a largely symbolic and ceremonial role.

In 1945, when Vietnam declared its independence from France , the monarchy was abolished, and the site soon became dilapidated. In 1947, the Viet Minh captured the citadel during the war of independence against France, often known as the First Indochina War. French forces, including French Foreign Legionnaires, managed to re-capture the citadel.

After the defeat of the French at Dien Ben Phu in 1954, the citadel formed part of State of Vietnam, or South Vietnam. During the Vietnam War and the Tet Offensive, the citadel was occupied by the communist Viet Cong who were supported by North Vietnamese army.  The American and South Vietnamese attacked the citadel during the Battle of Hue and when the Viet Cong continued to resist, the Americans launched air attacks on the historic complex. The citadel was badly damaged and many of the towers, which were used by communist snipers, were destroyed. It is estimated that of the original 160, only 10 buildings remained intact after the battle.

Since the end of the Vietnam War, the government has funded several programs, which continue to this day. Millions of dollars was reserved for both the restoration project and the relocation of hundreds of families living along the site’s wall.

The Remaining Sights of Imperial City of Hue

The citadel is located not far from the center of the bustling city of Hue and faces the Perfume River.  The wall that surrounds the citadel is six meters high and 1.5 miles (2.5 km) long, ringed by a water-filled moat . 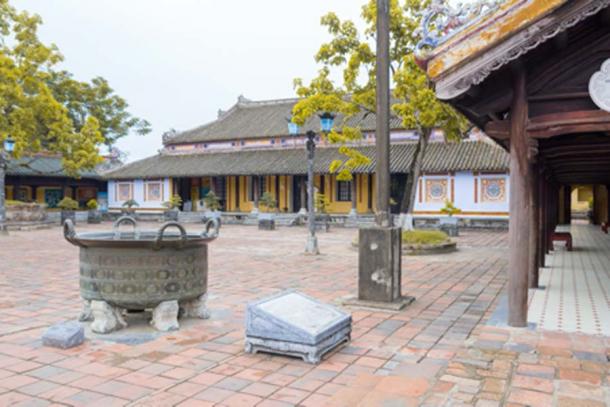 Within the citadel is a vast courtyard as well as a number of temples and shrines. At least six temples survived the battles of the 20 th century. The best-known temples are the Thế Miếu , which is dedicated to the worship of the ancestors of the Vietnamese Emperors. The Hall of Supreme Harmony ( Điện Thái Hòa ) is open to visitors and has a remarkable throne room . 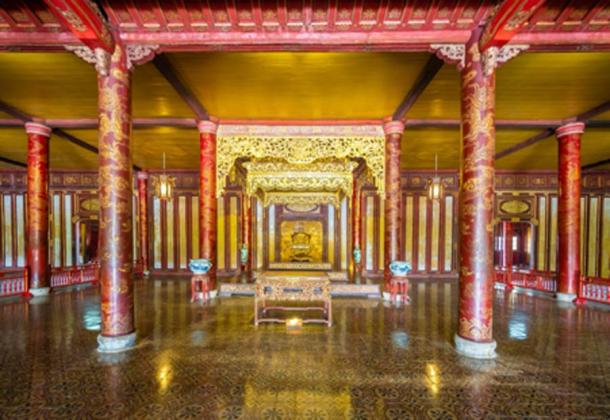 There are total of ten main gates leading to the Imperial City of Hue. Among them are the Ngo Mon (Meridian Gate) which was used exclusively by the royal family and their servants to enter the Purple Forbidden City. Access was strictly guarded. From this gate, the Vietnamese emperor would watch his troops in procession. 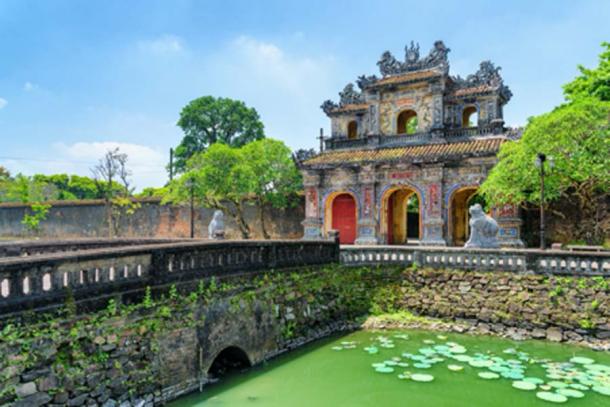 Within the Purple Forbidden City, are several splendid pagodas and a number of gardens with artificial lakes .  Much of the area was badly damaged, but even so, the remaining buildings are able to give a sense of the Vietnamese architecture.

Visiting the Imperial City at Hue

Visiting the Imperial City poses no difficulty as a number of tour buses head to the location. A fee is charged to enter, and it is also possible to hire a tour guide who can provide you with a great deal of information about the history of the site.

Some of the sites are considered holy and visitors are asked to to behave in a culturally appropriate manner.

Near the citadel are a number of other imperial tombs that are well worth visiting, the best known being that of Emperor Tu Duc, the longest reigning emperor of the Nguyen Dynasty.